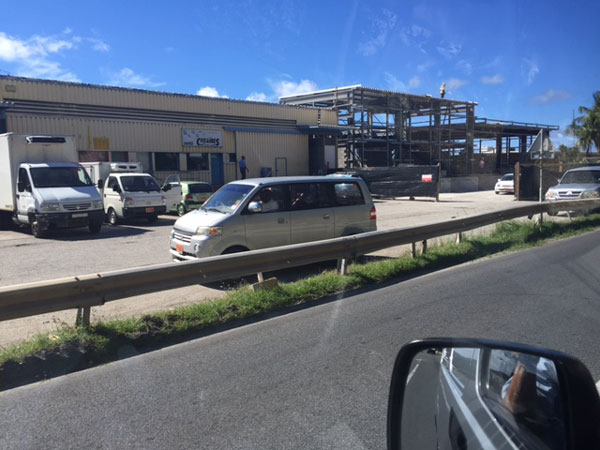 AIRPORT:--- Tenants at the cargo building at the Princess Juliana International Airport (PJIAE) are at their wits ends since they are unable to get answers from the operational and supervisory board of the government owned company. According to the tenants of the cargo building that is currently under construction the tenants said they were informed that their rent will increase by 10% while the increase is not a one-time increase instead the cargo tenants will face an increase in rent as per the cost per cost price index (CPI). Besides the drastic increase in rent the airport management chose to add a 4cents per kilo concession fees for all inbound cargo coming into St. Maarten. The 4cents concession fee will be added to food items, medication, dry goods, even human remains (dead bodies) that are shipped into St. Maarten will have this additional cost. While PJIAE management informed the tenants of the increase they are yet to respond to letters sent to them by lawyers requesting information about the concession fees since it is not clear if the concession fees is new form of tax while St. Maarten is a duty free country.Based on research there is no other country, islands in the Caribbean or even poverty stricken islands and or countries has this concession fees that is now implemented on St. Maarten for inbound or outbound cargo. However, PJIAE paid someone thousands of dollars to come to St. Maarten and say that the concession fee is worldwide and that the tenants should increase their shipping prices to compete and or meet their monthly expenses.
Some tenants who spoke to SMN News said that the concession fees will drastically affect the country’s economy since food prices will definitely go up and the surrounding islands would also be affected since goods coming through St. Maarten for the neighboring islands would have to pay a few cents higher per kilo.
The airport is also demanding that the tenants provide them with a certified profit and loss statement each year and to date cannot explain why businesses have to release their internal and personal business information to them while they are renting from PJIAE and not their business partners.
One of the things that have been kept a secret thus far is the agreement between the tenants at the terminal building and PJIAE who have been paying concession fees instead of monthly rents.
While PJIAE is stagnating the projects they have to complete such as the Fixed Based Operations (FBO) project, they will soon have to answer to Moody’s who gave them the $150M in loan and these projects have not kicked off. Just recently Moody’s met with Deputy Prime Minister Richard Gibson and informed him of their intentions to downgrade St. Maarten due to the slow economic growth of the country these past years.
Some weeks ago the tenants released some information on the state of affairs of the cargo building the last article published follows.

SIMPSON BAY:--- The management of Princess Juliana International Airport (SXM) has been ‘moving the goal post” with regards to negotiations to arrive at a mutually acceptable rental fee at the new cargo facility that is currently under construction at the airport. This is the view expressed by Safe Cargo, the largest air cargo operator on the island in a press release issued Thursday, March 17, 2016.
According to Safe Cargo, the airport management has also been “dragging its feet” in terms of decision-making, thus putting in jeopardy potential large investments that the company has been contemplating to upgrade its services with a view to increasing its market share. “Two years ago, SXM proposed an increase in rent per square meter as well as an air cargo tonnage fee of 4 cent. The proposal used the methodology of revenue-ton-kilometers which no other airport in the region uses,” the press release stated.
“In effect, SXM expects the tenants in the new cargo facility to pay two fees for the same space they are leasing. This is totally illogical,” the release continued.
Noting that the air cargo industry is becoming quite competitive, the release pointed to the fact that FedEx, DHL and UPS facing competition and decreasing yields in express markets and considering the limited growth in international small package now carry standard air freight as “fillers” but do not rent space at SXM airport.
This, according to Safe Cargo, means there is no level playing field at the airport in terms of air cargo fees.
Safe Cargo has been operating at the airport for more than 30 years. It is the largest operator, with over 40 employees and a vast knowledge of the cargo industry and market. It has often pointed out the unacceptable and inefficient conditions at the previous cargo facility to the Airport management to no avail.
There was an overall facility shortage and inadequate supply of staging, and storage areas, and the general hygienic and safety and security conditions were substandard. The airport, as the facility operator, was very late in meeting the air cargo infrastructure and facility demand, and in addressing current standards and upgrading the facility.
Meanwhile, Air Cargo yields continue to decline slowly, consistent with persisting weakness in load factors, keeping downward pressure on cargo business financial performance. Air cargo load factors on average are showing a weak 45 percent, therefore aircraft utilization
rates will continue to be challenged by ever increasing capacity.
According to the most recent figures available, SXM Airport handled 5,314 tonnes of cargo in 2014. 83% of the air cargo in that year was inbound, while the remaining 17% were outbound. This means that imports outpaced exports by a ratio of about 5 to 1. Ten airlines provided air cargo services to SXM airport in 2014.
The proposed tonnage, through-put or concession fees will affect the various sectors and ultimately the consumers. In other words, the public can expect an increase in the prices of goods imported by air cargo, if the airport insists on these fees.
Additional tariffs, Safe Cargo warns, will curtail demand, and result in airlines focusing on increasing costs. This will make air cargo fail to fully deliver on its promise and lead to a possible exit of the company from the airport and possibly even from the country.
This, of course, is far from desirable given the important role Safe Cargo and air cargo in general play, especially in emergencies. During disasters such as Hurricane Louis, Safe Cargo
played a key role in the delivery of urgently needed assistance. Safe Cargo enabled St. Maarten, St. Martin and the surrounding islands to efficiently connect to distant markets and global supply chains in a speedy and reliable manner. The company attracted a 767 aircraft to the island, thereby enhancing the competitive position of the airport in the region.
However, the air cargo infrastructure development at SXM is not integrated with the
process of attracting and retaining air cargo carriers.
The lack of dialogue with stakeholders, a lack of information concerning the completion of the Cargo Terminal Building and the applicable standards and services and the constant change in policies by the SXM airport management team all combine to place the further
sustainability and growth of the Cargo Market on the island at risk. This will invariably have a negative impact on SXM Airport itself and on the economies of St. Maarten/St. Martin and those of the hub islands

Click here to read part of the contract given to the tenants of the cargo building.