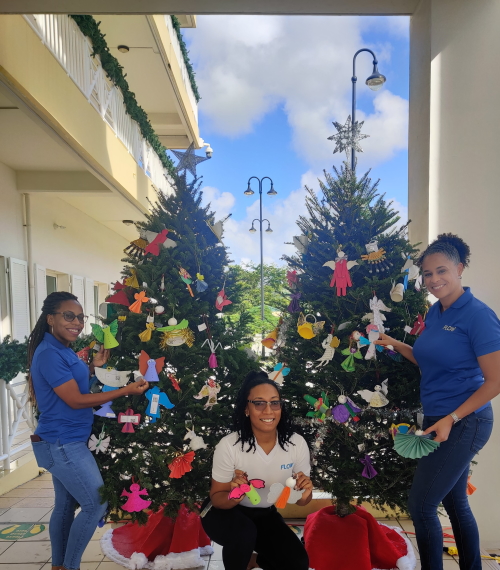 PHILIPSBURG:--- FLOW visited the K1 Britannia Foundation’s Christmas Angels Project to support the NGO in its 9th Annual edition of the program. The operator chose to support within the scope of the yearly Mission Week activities of parent company, Liberty Latin America (LLA). Annually company volunteers across the Caribbean and Latin American region dedicate their time during Mission Week to volunteering and supporting local NGOs in projects that support learning, enhance connectivity, environmental protection, and more.

On St. Maarten, the company and its employees supported the annual gift drive of the K1 Britannia Foundation in various ways. Staff members will choose Angels from the K1 Christmas tree and they picked out gifts for those recipients in need. The focus was on gifts that bring fun, and learning and enhance connectivity to foster literacy and learning. In addition, the staff also joined other K1 volunteers of the Angel program. Annually a team of volunteers from across the community help to register visitors, helping them select their Angels and receiving and wrapping gifts that are brought in.

Flow will also support financially towards the holiday celebrations that wrap up the Christmas Angel program. During the celebrations, the recipients gather for a festive, fun holiday celebration. They’ll receive their gifts but will also be treated to snacks, entertainment, and games. “We are thrilled to join K1 Britannia Foundation once again on the Christmas Angels project and we’re very happy with the opportunity to get our staff involved in something so meaningful.” says Flow Statutory Director, Rauf Engels “I commend our team for getting involved to make sure that those in need in our communities can have an enjoyable holiday season. It’s the time of year to be thankful for our many blessings and to share in that with those in need. We appreciate the trust our customers have put in us during the past year and it’s important to us to do our part to give back.”

‘We appreciate the many corporate citizens, like Flow, that support the various K1 programs.’ says Christmas Angels program coordinator, Chiaira Bowers’. The corporate support over the years and the many community volunteers allows our programs to make a difference in our community. We want to thank everyone that has volunteered their time, donated funds or supported our programs in any way for their support”

“The decision to support K1 Britannia is an easy one to make because they show up for our island when it matters and help where its most needed.” “Flow has supported K1 Britannia in various ways, such as providing K1 with the communications they need year-round and on helping to train volunteer support teams to functional optimally in the face of a disaster.” Engels continues “We believe in the power of sustainable partnerships, and commend K1 and their volunteers for their dedication and commitment to St. Maarten.”

GENEVA (ILO News) – More than one in five people (almost 23 per cent) in employment have experienced violence and harassment at work, whether physical, psychological or sexual, according to a new joint analysis, the first of its kind, by the International Labour Organization (ILO), Lloyd’s Register Foundation (LRF) and Gallup.

Experiences of Violence and Harassment at Work: A global first survey provides a sense of the extent of the problem and its different forms. It also looks at the factors that may prevent people from talking about their experiences, including shame, guiltor a lack of trust in institutions, or because such unacceptable behaviours are seen as “normal”.

Violence and harassment at work is difficult to measure. The report found that only half of victims worldwide had disclosed their experiences to someone else, and often only after they had suffered more than one form of violence and harassment. The most common reasons given for non-disclosure were “waste of time” and “fear for their reputation”. Women were more likely to share their experiences than men (60.7 per cent compared to 50.1 per cent).

More than three out of five victims said they had experienced violence and harassment at work multiple times, and for the majority, the most recent incident took place within the last five years.

“Gathering robust data on this highly sensitive issue is challenging but essential. For the first time, this report lifts the veil on this pervasive problem which plagues more than one in five workers globally,” said Andrew Rzepa, Partner, Gallup. “For too long, companies and organizations have been unaware or unwilling to tackle violence and harassment in the workplace. This dataset provides a baseline that we can all use to track much-needed progress on this vital safety issue.”

“To tackle global safety challenges as difficult and deep-rooted as violence and harassment at work, it is critical to have good data to understand the extent of the problem and to identify those most at risk, especially in places where little reliable data may have existed previously,” said Sarah Cumbers, Director of Evidence and Insight at Lloyd’s Register Foundation. “We are very glad to have been able to work with Gallup and the ILO to make this landmark contribution to filling these data gaps as part of our World Risk Poll, and to provide a benchmark for countries to make improvements, driven by the vitally important ratification of Convention 190.”

The report makes a range of recommendations, including:

Regular collection of robust data on violence and harassment at work, at national, regional, and global levels, to inform prevention and remediation laws and mechanisms, policies and programmes, and research and advocacy.

Extend and update mechanisms to effectively prevent and manage violence and harassment in the world of work, including through labour inspection systems and occupational safety and health policies and programmes.

Enhance the capacity of institutions at all levels to deliver effective prevention, remediation and support, to build people’s trust in justice and ensure victims are supported.

The ILO-LRF-Gallup study was based on interviews conducted in 2021 with nearly 75,000 employed individuals aged 15 years or older in 121 countries and territories, as part of the Lloyd’s Register Foundation World Risk Poll.

Since 2018 Wageningen University & Research and Carmabi cooperate in bringing together historical and recent data on vegetation composition and plant species distribution on the six Dutch Caribbean islands. Plant observations from this CACTUS database are now online available through the Dutch Caribbean Biodiversity Database (DCBD) website (http://speciesdistribution.dcbd.nl). The website has been launched in Aruba in the first week of December.
The CACTUS database consists of about 2500 digitized vegetation relevés, resulting in about almost 40,000 plant species observations. These have been complemented by about 10,000 plant records from digital photos, citizen science databases, GBIF, inventory reports, and additional field records. For more than 80% of the occurring total of native and naturalized non-native vascular plant species on the six islands, some observations are now available, mainly covering the period 1950-2022. Currently, an NLBIF project is carried out aiming at digitizing additional historical herbarium records for all six islands.
Data are presented on a 1x1 km grid resolution on the website (figure 1). Geographically more detailed data are available upon request, for scientific and conservation purposes. The website allows the selection of observations within time periods, which enables trend analysis of distribution patterns of species, (figure 2), especially in cases where the data availability is similar in compared periods. Trend analysis is an essential tool for constructing Red Lists of endangered species. Furthermore, it is possible to see data gaps for specific species, which may encourage enthusiastic plant hunters to provide new observation records of these plants.
The amount of observations per island differs strongly, with by far the most records (56%) coming from Curaçao, followed by Aruba (13%) and Bonaire (11%). For Sint, Maarten data are still relatively scarce. New records are added on a regular basis, after which the presented data on the DCBD website is updated.

“Ms. Hyman returned to Sint Maarten after her studies. Her training and educational background, followed by her experience gained working at several institutions including the Mental Health Foundation and The Foundation of Judicial Institutes, provides us with a great opportunity to hear her views on the issue of domestic violence and its effects among others on mental health”.

Arrindell continues; “The program will be informative and enlightening to the general audience and professionals alike. It also contains en element of entertainment given the end of the year Holiday Season.
Another highlight will be the presentation of a strong message from a survivor of a horrific domestic assault. This message will be delivered by a family member spokesperson. Voices cannot be silenced.”

“It’s critically important that we continue to collect, analyze and share subject-related information and have solutions to prevent and eradicate violence against women and girls. Better equipped and emboldened” 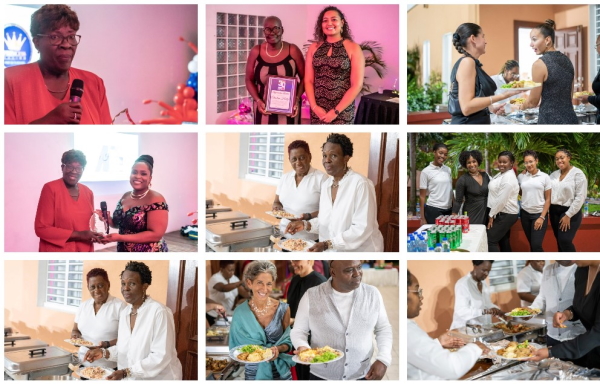 PHILIPSBURG:--- Members of It’s Time SXM Foundation and Kreative Juices Restaurant were available on Saturday 26th November to cook up a storm. A delicious buffet for special guests, invitees, and supporters at large, that attended the WIEMS 30th Anniversary Celebration Fundraising Dinner was prepared with all hands on deck.
President of It’s Time SXM Foundation, Mr. Cloyd Ohndhae Marlin: It was our honor to sponsor the dinner for this prestigious organization. The Board of It’s Time SXM Foundation continues to emphasize the importance of recognizing and supporting groups in our community that has withstood the test of time as it relates to their invaluable contributions to St. Maarten. Thirty years of service is a significant milestone, and we could not have foregone the support requested from the board members of WIEMS, to sponsor the dinner. We congratulate WIEMS and encourage them to continue to push forward, entering a new chapter, built on a 30-year strong foundation.”
WIEMS has maintained a positive continued presence over the past 30 years and just recently provided its services during the first annual Caribbean Baseball Tournament. An event that was also organized with the support of Its Time SXM Foundation.
Mr. Marlin continued: “We can not stop expressing the importance of joint collaboration efforts, for together we are stronger and stronger we can withstand the test of time and any challenges that we may face – resolving all that comes before us positively together. Congratulations WIEMS!”