PHILIPSBURG:---  On Monday, September 21st, 2020, a staff member of the Cabinet of Justice advised the Minister of Justice Anna E. Richardson that Collective Prevention Services (CPS) had shortly confirmed that they tested positive for COVID-19. Thursday, September 17th, 2020, was the last day the staff member was on the job.

Considering the close contact between the staff member, Minister Richardson, and the cabinet staff were contacted by CPS on Monday, September 21st, 2020, and advised to quarantine immediately, which they did. As such, the offices of the cabinet of Justice are being cleaned and sanitized.

Notice of the positive case was given to the Council of Ministers, the Secretariat, and persons who have been in close contact with Minister Richardson and her cabinet staff within the past four days to advise them of this development. “Although my cabinet staff and I are in quarantine, we are working from home and will continue to execute our duties within the health perimeters as prescribed by CPS,” stated Minister Richardson.

At this present moment, Minister Richardson nor any of the other staff members have symptoms of the COVID-19 virus. Minister Richardson stated that she will rest and remain hydrated by drinking lots of fluids such as herbal tea and water along with the intake of vitamin C. She plans to expose herself to healthy portions of sunlight and continue to stay positive in faith.

“I am bidding everyone to stay healthy and continue to take the necessary precautions to remain safe. All persons still working in the government administration building are reminded to uphold mask-wearing protocols while less than 2 meters away from others and hand sanitizes regularly. Know that this is a situation that is affecting the entire world and not just St. Maarten, as such we will pull through this. The staffer and her family remain in our prayers and is wished a speedy recovery,” Minister Richardson concluded.

PHILIPSBURG:--- As of September 21st, there were seven (7) persons who tested positive for COVID-19, however, there was a recovery of seventeen (17) persons; bringing the total active cases to sixty- six (66). The total number of confirmed cases is now five hundred and ninety-one (591). The Collective Prevention Services (CPS) are monitoring 63 people in home isolation. Three patients are hospitalized at the St. Maarten Medical Center and the total number of deaths due to COVID-19
remains at 20.
The number of people recovered since the first case surfaced on St. Maarten is 505. Forty- six (46) people are in quarantine based on contact tracing investigations carried out by CPS of persons who may have been in contact with any of the active cases.

CPS has tested 991 travelers arriving at the Princess Juliana International Airport, (PJIA) and 1890 people throughout the community. As the numbers continue to fluctuate, CPS will continue to actively execute its contact tracing measures.
Minister Panneflek wishes all persons affected by COVID-19 much strength. He encourages persons returning home daily, to leave your shoes at the door, remove your clothing, and shower immediately before interacting with your family members. We are in this fight together and we must adhere to the implemented guidelines to safeguard ourselves, our family, and our community in efforts to flatten the curve. 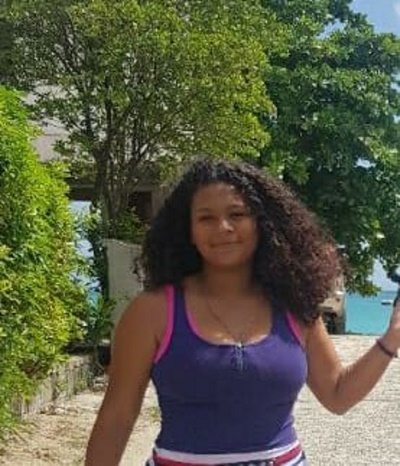 PHILIPSBURG:--- The mother of 13year old Helen Cartagena Valencia filed a “missing’s person report”, today Monday, September 21st after the teen girl had not returned home since Saturday the 19th.

According to the reports filed with the Youth and Morals Department, the teenager left her house in Simpson on Saturday afternoon at approximately 2:00 pm and has not been seen since then.

She was last seen wearing a maroon-colored t-shirt and black short pants.

The Police Department is seeking the assistance of the community to help locate Helen Cartagena Valencia.

If you know/ think you may know the whereabouts of the missing teen please do not hesitate to contact the Sint Maarten Police Force at 54-22222 ext 203- 204-205, by calling the 911 emergency number or by sending the police Facebook page a private message.

Persons can also contact the mother of the missing teen, Angela Valencia, at 526-3226. Helen if you are reading this, please contact the police or your mother and let her know that you are safe.

The teenager that was reported missing by her mother turned out to be a wayward13-year old who is in the habit of leaving her mother's house. Shortly after the publication of the missing person report the teenager wrote a comment on the Police Facebook page saying that she is not missing using an obscene language while indicating that her mother loves drama.

Police have since informed the media that the teenager returned to her mothers' house where police juevnile officers are busy speaking with her. It should also be noted that this is not the first time the teen ran away. The last time police reported her missing was in February 2020. 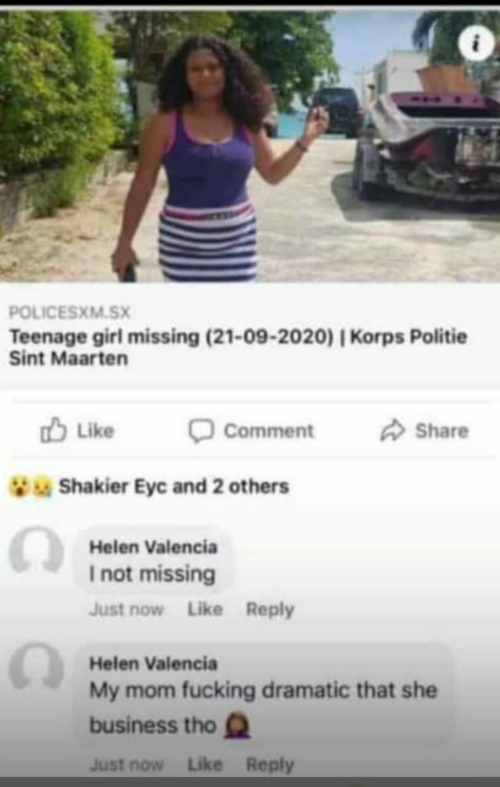 The Sint Maarten Police Force would officially like to inform everyone that Helen Valencia has returned home safely.

The Youth and Morals department has spoken to the minor and as well as her parents regarding the consequences of leaving home without proper communication.

We would like to especially thank the community for the quick sharing of the post. Together we can always make a difference. 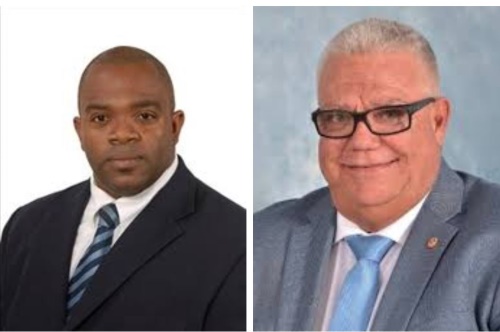 PHILIPSBURG:--- Member of Parliament Christopher Emmanuel is due to appear in court on Tuesday as the Prosecutor’s Office seeks permission from the appeals court to prosecute the re-elected Member of Parliament.
Emmanuel is a suspect in the Begonia investigation. The former Minister of VROMI was arrested on October 22nd, 2019 when his name was submitted for screening since he was a candidate Minister for the Jacobs 1 interim government. Due to the arrest, Emmanuel could not be appointed Minister. On the same day, Emmanuel’s former chief of cabinet Marissa Richardson was also arrested, both Emmanuel and his former chief of the cabinet were released on October 25th, 2019.
Since then, Emmanuel ran on the National Alliance slate as their number 2 candidate who secured the second-highest amount of votes but fell out with his party during the National Alliance and United Peoples Party government formation.
Even though Emmanuel does not support the current coalition government he did not resign from the National Alliance.
Also slated to appear in court next week Tuesday is Member of Parliament Claudius Buncamper who is a suspect in the Landfill investigation that is undertaken by the TBO. MP Buncamper is accused of taking bribes as he was in charge of managing the Landfill while being the head of the Maintenance department in the Ministry of VROMI.

UPDATED: The case regarding MP Emmanuel was removed from the role for this morning. The spokesman for the Prosecutor's Office has confirmed that the case will be heard on October 6th 2020. No details as to why the case has been postponed for the 3rd time.

PHILIPSBURG:--- NAGICO Insurances has granted another one-year rent-free accommodation to the A.C.E. (All Children Education) Foundation school which is run by Claire Elshot.
This decision by NAGICO came just before the rental contract with the school would have expired. The A.C.E Foundation school has been occupying the building owned by NAGICO since 2015 following their eviction from their previous location on LB Scott Road. Since then, NAGICO agreed to temporarily house the school free of charge to allow them time to find a more permanent location.
According to Elshot, the school which provides education to students of varying nationalities have been struggling to obtain adequate funding to pay for a location.
“Given the negative financial impact the COVID-19 virus is having on everyone, we knew we had to find a way to facilitate these children and the teachers, we could not turn our backs on them at a time like this, that is simply not humane or the NAGICO way of doing things, so we had to go back to the drawing board, and pull out all the stops to see how we could assist for at least one more year, with the hopes that things improve during this time,” Territory Head and Managing Director of St. Maarten; Eric Ellis said.
This means that NAGICO will continue to absorb the cost of rent for the location until September 30th, 2021.
“It is commendable what Claire Elshot and her team have done and we wish her much success in their efforts to ensure that these students are not displaced, and the teachers are not unemployed,” Ellis said.